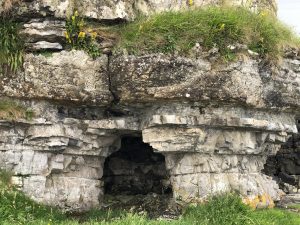 This summer, as for the last twenty years, I and my family retreated on holiday to the hallowed shores of Ardnamurchan. There is always something new to discover in this remote peninsula, the far end of which is the westernmost point on the British mainland. A mile along a bouldered, volcanic shoreline from a place called Swordle Bay – site of a recently excavated Viking burial ship – is a well-hidden cave. It has four separate entrances and from the outside looks like a tilting four-legged stone stool.

Local legend tells the story of how the cave offered shelter to the Irish monk, Columba, on his travels bringing the Christian Gospel to the farmers and fishermen of Ardnamurchan from his base on Iona. On one occasion he baptised two
robbers with water from a pool of fresh water set into the cave’s mouth. One of the robbers is said to have offered a prayer of thanks, asking that the water “might never run out.” Indeed 1400 years later the pool is still full. I visited the cave again this summer with my family and as we sat in the darkness we were joined by a woman who told us she had been coming to the area since the age of five, and that the cave held special significance for her now, connecting her to her father. She showed us something we had missed – an inner chamber that can only be accessed by crawling through 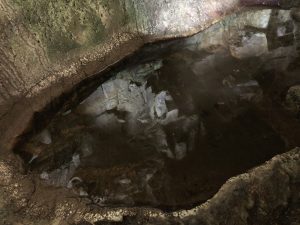 a narrow entrance at floor level and dropping down into what turns out to be a cavern large enough for a banqueting hall. Very little natural light penetrates this space so one has to be told that it is there, and then one has to be brave enough to venture through.

It struck me afterwards that as we shared conversation with a stranger about the story of the cave, we had found ourselves in one of those ‘touching places’ where God feels very near. Perhaps it was the association with the sacrament of baptism, but I think also it was the reminder that God is often sensed at work in the hidden places – both those marginal places which we fail to notice in our daily lives and also those places in ourselves which are somehow below our internal radar.

“I will give you the treasures of darkness

and riches hidden in secret places,

so that you may know that it is I, the Lord,

the God of Israel, who calls you by your name.”

In prayer we can enter a hidden inner chamber such as Jesus invites us to find when he teaches about prayer in Matthew’s Gospel:

“But whenever you pray, go into your room and shut the door and pray to your Father who is in secret…”

We too can find a connection with our Father in heaven, simply by being brave enough to sit quietly and listen, letting God find us in our secret places where he calls us by name and reveals to us the treasures he is longing to bestow upon us – treasures such as knowing we are loved and enjoyed by God for who we are; the treasures of friendship, family and human love; the treasure of a beautiful creation which provides our needs; the treasure of real peace in a world riven with conflict.

I hope and pray that you will be able to let God bestow these treasures upon you in the coming weeks and months.